Gemma and her Extended Family

Introducing Gemma, a very young gray/calico mother who had 4 kittens of her own, but as she was too young and the kittens were too malnourished, only one survived. Gemma previously went by the name Green Eyed Momma for her intense peridot green eyes, which I shortened to Gemma (jem-MA) and is a wonderful, outgoing and friendly cat who seems like she once belonged to a human who may have dropped her off when she got pregnant. Gemma's surviving kitten - who still needs a name - is a pretty brown calico/tortoiseshell. When the need arose to find a nursing mom for some other orphans from different litters, Gemma happily accepted them into her family.  Gemma is very protective of her kittens so hard to tell if she'll be ok with other cats after her babies are gone, but currently is not good with dogs. 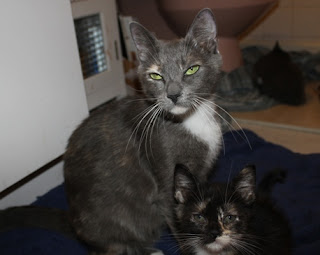 Gemma's baby (no name yet) is a pretty tortie girl who is wide-eyed and boisterous.  She is the youngest of this extended family so gets beat up on a bit by her adopted siblings, though she holds her own, despite battling fluid in the lungs since birth.  We've taken her to the vet twice and her tests and X-rays all turned out fine.  The culprit is probably from aspirating during birth (Gemma may not have broken her from the sack fast enough) or possibly from drinking mom's milk.  The vet thinks she'll be fine, she just has to grow out of it as long as she's closely watched. 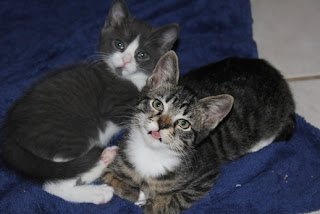 Dancer is the handsome striped tabby boy with white socks and a wide, slightly squished-in face. He has a strong, well built stocky little body and very expressive face. His strong stripes are very distinctive, but not nearly as much as his personality. Dancer is one of those no-fear cats who wants to play with everything and everyone he comes into contact with. I think he is trying to audition for a Friskies Kitten commercial, but he is also a sweet and cuddly lap kitty who mellows out when he can snuggle next to you or on your lap. He gets along very well with other cats and is quite tolerant of dogs.  He doesn't mind at all when a 100 lb German Shepherd comes up to give him a lick.  He comes out of the studio sometimes to play with Bindy, the black kitten from the last kitten-cam litter, whom is still available for adoption. 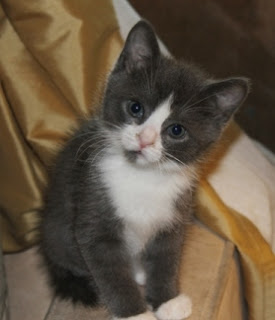 Tomi is the gray and white kitten who looks like Tom from Tom and Jerry. Its hard to tell right now if its a boy or girl yet, though I'm starting to lean towards girl. This kitten is part of a litter of 3 gray and gray/white kittens, with the other two being nursed by another adoptive mother at another foster's home. That momma cat also took on a couple litters that were not her own so we had to split up the gray ones to ease the burden on the two mothers. She is recovering from the sniffles but should be ready the second weekend in June.