Momma has her own aparment

"Momma" is the feral cat mother of the first kitten cam litter.  We got enough donations to treat her UTI and get her spayed and ear clipped so she can be set free to live the life of a free feral cat, but she went into heat after her kittens left so the surgery was put off until later.  Now that her constant meow's have calmed down I think its a good sign that she's past her "heat" cycle and it is safe to get her fixed, so she will be getting her surgery soon.  For now she is sharing space in the Studio, but keeps clear of Gemma and her babies by hanging out on the windowsill and the little apartment I made for her on a corner cabinet. This cabinet stretches from windowsill to windowsill, giving her easy access to the view but also letting her have her own food and water bowls and litter box, so she doesn't have to cause drama by coming down to the floor where Gemma will try and beat her up, fearing for the safety of her kittens. 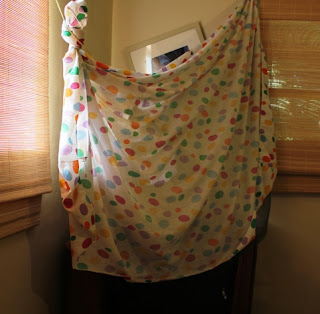 Here are pictures of the little habitat I made for Momma.  I hung a sheet in front of the cabinet so she can have privacy, and the screen from the window that she destroyed, hangs down and peeks out from the corners of the sheet, so she can view what is going on in the room while giving her the feeling that she is totally hidden.


Getting her fixed is not going to be an easy task.  She is feral, feral, feral.  Any exposed skin I put near her would certainly be attacked as she does not trust humans, even ones that have been feeding her and keeping her safe for 3 months.  I'm going to have to get her in the carrier, which means I'll have to trap her.  Hard to trap a cat by luring them with food if there are other cats in the room that would take that food and foil your trap, so it will take some strategic thinking and moving the kittens and Gemma into another room while we attempt the capture.  I've caught her once before in a big crate by tying a string to the door and watching from the surveillance camera in the other room, but getting her in a smaller carrier will be tougher.

Here is a video from my last trapping attempt.  Her babies were getting surgery in the morning so I had to separate her from them so that she could not feed them during the night.

I'm not in a hurry to get her released, since she keeps to herself and doesn't bother the others.  Right now Florida is experiencing an extreme drought, so water is scarce so setting her free now would be unnecessary hardship.  I know she isn't happy about being cooped up and wants to be free again, but I will feel a little sad when she finally goes.  I want to keep her safe as long as I can, but eventually she will get back to the life of a wild, free roaming cat.  She always seemed pretty healthy and never showed signs of starvation like many other feral cats, so I will release her back where we found her, which seems to be full of food sources.