﻿
Rue, also known to the kitten cam world as Princess Rue, was part of a litter of 3 screaming kittens abandoned by their mother under a local Delray Beach private school/artist studio.  Little Rue and her sister Effie and her brother Gale, were found at the right time, as a mother cat named Jessica was just getting the hang of being a mom of two and could accept a couple more, or so I thought.
The screaming banshees, as I called them, were a bit too much for Jessica to handle, so I had to assist in bottle feeding.  My dog at the time, Stella, was happy to help be mother and took care of a lot of the less glamorous parenting duties.  For a few days, two other orphan kittens, Peeta and Katniss, also joined my "Hunger Games" litter and Stella helped them all.

Jessica got better at motherhood and I decided to fire up the kitten cam again.  I put Jessica, her 2 babies, Haymitch and Cinna, and my three orphans together on camera.

Weaning Rue was a chore.  When she discovered wet food, she always threw her entire body into the wet food, requiring baths multiple times a day. Stella enjoyed the first phase of bath, licking off much of the formula and wet food, but I would usually have to bathe her entirely.  Here is a pic of Rue after swimming in her food/formula mix and screaming at me to stay with her. 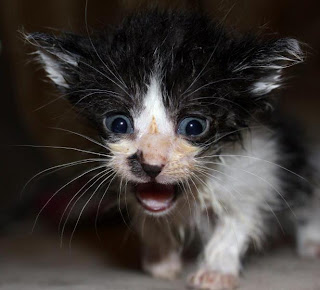 My kitten cam cast grew again with the arrival of Rainbow and her brood of 5.   Jessica went to another foster home and the kitten cam crew got bigger.

Rue had problems growing, so she took a while to grow up.  While other litters came and went, she was still on the kitten cam.  She was always the star. And just got feistier though didn't grow much for a while.  When she was added to the Finding Nemo litter, she was smaller but 2 months older, and DEFINITELY the boss.

Rue eventually grew up, and I was too smitten with her to give her up.  Now when I am not at home she is allowed to go visit the kittens and the kitten cam, always wanting to be the star :)