The Ocean Kittens : Varuna and Triton

Seven weeks ago four orphaned kittens were on the Last Call list at animal control with just a couple hours to spare when I, the user and volunteer known as KittenRescues, ended my kitten fostering break and volunteered to rescue them.  Within days all four of the kittens, Kai, Delphine, Triton and our little Varuna, a spunky Tortioishell/Calico (we called her a Tortico even if that isn’t a real term) with a white slash over her left eye that made her look fiercer than her little body should allow, had a terrible case of coccidia and barely made it through the weekend.
Then Triton had an unusual reaction to dewormer and developed an acute case of life-threatening encephalitis.  Two days of hospital care later and he was mostly blind, but alive and very much interested in living life.  Varuna developed a strange hole above her eye which we later found out was where a Botfly larva had tunneled and was growing gruesomely.  Triton had one hidden on his neck, which thereby explained the encephalitis.  After removal from both of them, antibiotics and weeks of treatment for the coccidia, all four kittens were on the mend, super happy, and even Triton's vision was returning and his motor skills were improving.   They were ready and willing to take the place of the first cast of Ocean Kittens who were all dealing with a bad cold and needed my extra attention so they became our stars. 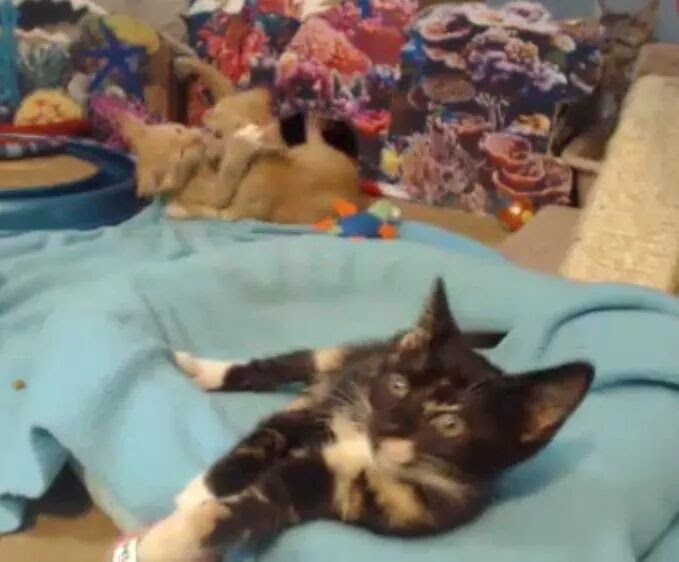 Varuna, the pretty little girl who liked to sit on the top coral reef box, always seemed ok but in hindsight was always a little more laid back than her siblings and was a bit slower and skinnier than the rest but feisty, loving and playful.  For example, within hours of getting spayed Dr Ciucchi almost had to separate her from her brothers because she was so feisty and was beating up on her innocent brothers who had undergone a much less invasive surgery than she but were just wanting to sleep and cuddle.  With greater scrutiny than most because of her history, the vet gave her a clean bill of health.

However, sometime in the evening of August 24, three days after spay surgery, Varuna and her brother, Tritan, both became sluiggish and lost their appetites.  Their behavior looked much like that of the coccida issues from before, but each was able to walk around, drink water and eat on their own.  I went over to KitCatsMom’s place to pick them up for overnight attention and to take them to the vet in the morning.  I made sure they were well hydrated, medicated, received a heating pad and a comfy bed and lots of attention.   At 6 AM on August 25, just an hour before she was to take a trip to visit the vet, our little Varuna took a dramatic turn and lost a lot of body heat very quickly.  She lost the ability to stand and her breathing became extremely labored.  At 6:59, while in my arms as I tried to warm her, stimulate circulation, and make sure she knew she was very much loved, our Varuna passed away very calmly and peacefully.  It was very shocking and devastating to both KCM and myself.  It is a reminder that kitten life is fragile and every minute and every bit of love we share with them is precious.

Triton was more robust and overall more healthy than Varuna, despite his neurological issues caused by encephalitis from a Botfly larva that he also hosted, and his symptoms were not as pronounced nor hadn’t progressed much until the morning.    The vet diagnosed him with renal failure, and his temperature had dropped to just below 97 degrees.  We gave the go-ahead to pursue aggressive treatments and now he has stabilized, his temperature is back up to a nice 102 degrees, and he will continue to receive kidney treatments for the next three days when we hope his blood chemistry will normalize.  He has a few difficult days of fighting ahead of him still, but we are hoping and praying that he remains as much of a fighter as he has been thus far. 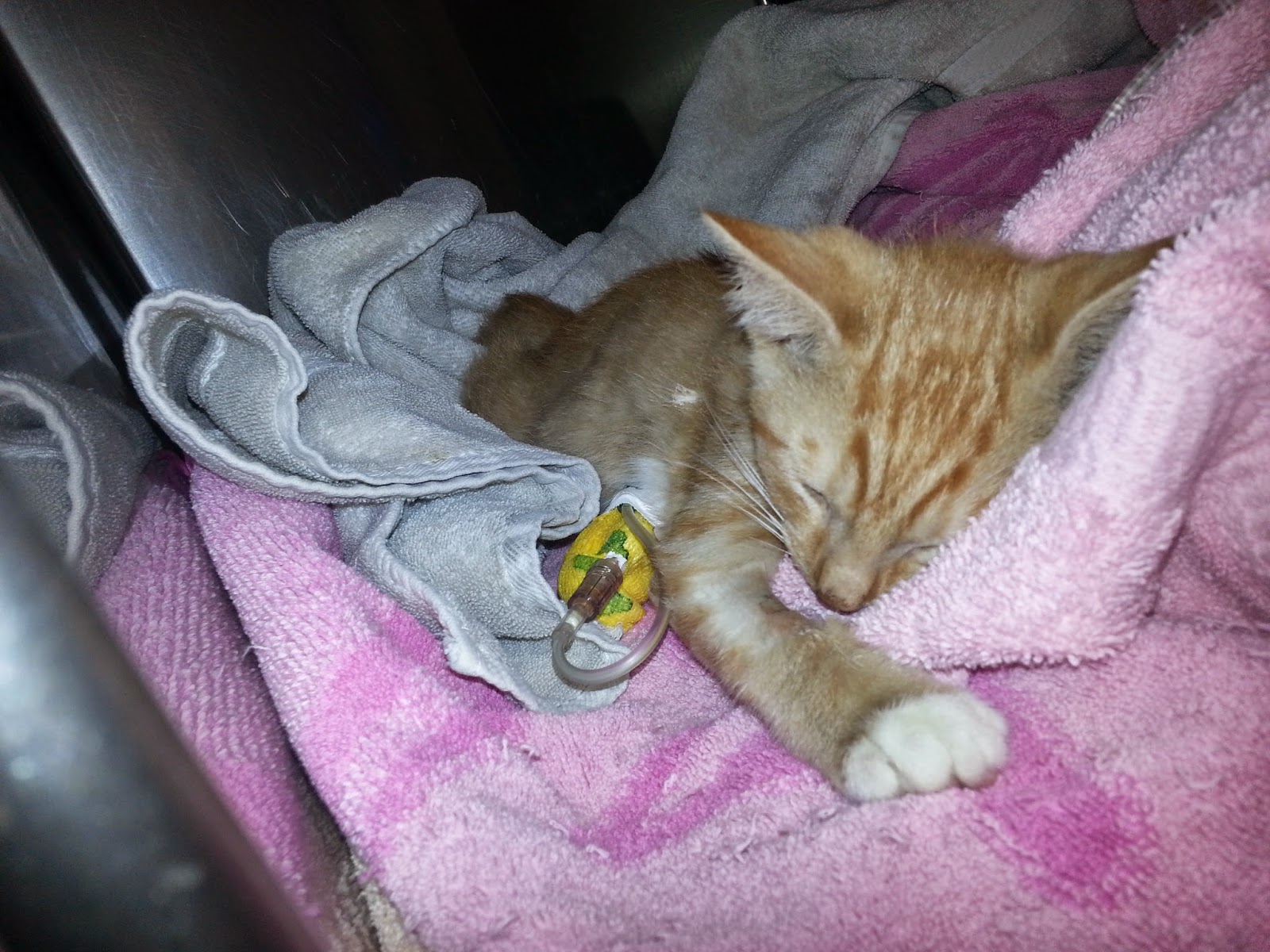 It is not clear what caused these two kittens, but not their siblings, to get sick.  Renal failure can be caused by a number of issues, including possibly lingering Botfly toxins combined with the effects of spay and neuter surgery, so that is a possibility.  Neither Kai nor Delphine were infected with Botfly so that is significant.  However, there are still dozens of other possible causes that are too numerous and speculative to detail here.  Our hearts are broken and we know that those of our kitten cam viewers will be, too.  We ask for the sake of all our healing, that the cat chatters try to refrain from engaging in too much speculation about things we may never have the answers to, as we all remember and grieve for our little Varuna, and pray for out Triton, and keep enjoying our playful Kai and Delphine who seem totally healthy though we will get them checked out just to be sure.
To donate to help Triton's costly recovery, please go to his sponsorshop page: http://www.asecondchancerescue.org/animals/sponsor_this_pet?AnimalID=7381030